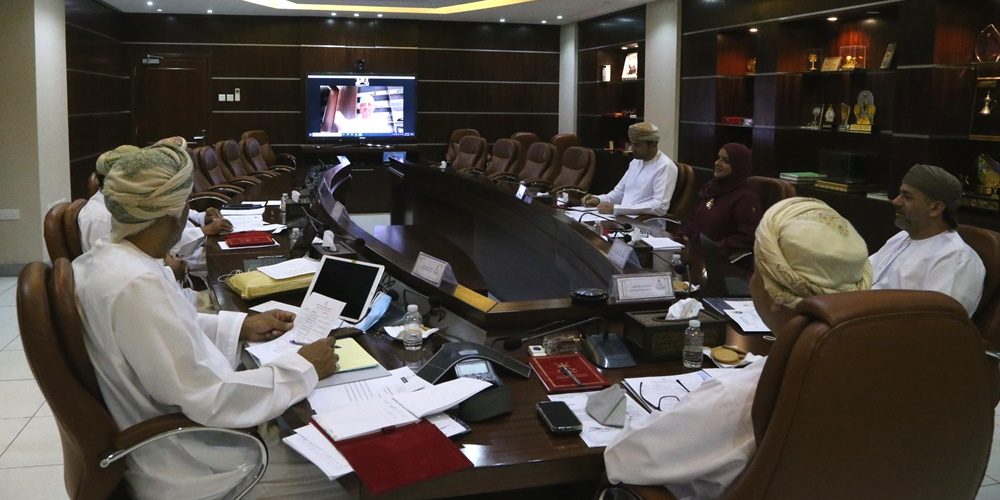 OOC Board holds the 3rd meeting this year

Oman Olympic Committee (OOC) Board of Directors held the 3rd meeting this year last Thursday morning, headed by Sayyid Khalid bin Hamad Al Busaidi, OOC President. During the meeting, a number of important topics included in the agenda were discussed, as the minutes of the previous meeting held last September were approved, as well as reviewing the implemented decisions issued, according to what is contained in the minutes.

The attendees reviewed the minutes of the meetings of sub-committees represented by Oman Athletes Committee, the Personnel Affairs Committee, and Sports and Active Society Committee. The minutes included details of the activities that the committee will implement during November, which is the Sports Walk Day, which will be held in Khasab, Musandam Governorate, next Wednesday. As well as, the beach sports event that will be held at the end of this month at Seeb Beach.

The Board also reviewed the invitation received from Sheikh Fahd bin Nasser Al-Sabah, President of the Kuwait Olympic Committee, to participate in the 3rd GCC Sports Games, which will be held in Kuwait during the period from 9-19 January 2022, where Oman, represented by OOC, will participate in the above course includes 9 games to be present in this forum and the GCC Olympic sports gathering, after coordination was coordinated with the sports federations and committees that expressed their desire and willingness to participate: (Athletics, Swimming, Shooting, Karate, Tennis, Cycling, Football, Handball, Volleyball). The attendees were briefed on the letter from the General Secretariat of GCC setting the date for the draw for the group games, which are: (Football – Volleyball – Handball – Basketball). Ali bin Salem Al-Busafi, Chef de Mission of Oman, was nominated to attend the draw, which will be held on 14 This November, at the headquarters of Kuwait Olympic Committee.

In light of the invitation received from Arab National Olympic Committees to attend the meeting of the General Assembly to be held in the Kingdom of Saudi Arabia on December 8, 2021, the Board of Directors decided to assign Khalid bin Ali Al-Adi, OOC Treasurer, to attend the meeting.

The attendees were briefed on the list of applicants for sports personalities, according to the announcement issued OOC in the media last September, amounting to 12 sports personalities, and according to the sequential procedures followed for the conduct of the electoral process, a meeting of the OOC extraordinary general assembly will be held on December 27 next to elect a number of sports personalities. Two (2) of the sports personalities for the General Assembly for the electoral cycle (2020+1-2024). The attendees also reviewed the proposal of the names of the members of the Elections and Appeals Committees that will supervise the upcoming elections of the Committee, and it was agreed to present them at the Extraordinary General Assembly for approval as stipulated in the Elections Regulations.

The Board also reviewed the invitation received to participate in the 17th International Sports Games for Asian Children, which will be held next year in Vladivostok, Russia.

The members also reviewed the general perception of the project of the National Olympic Research Award, which aims to support research proposals related to the Olympic movement, and supports and implements research and studies that would provide an innovative product to develop the sports and life aspects related to the fields and the Olympic movement, and the Board formed a small work team to study the proposal and raise the perception of Comprehensive for presentation to the next board of directors.