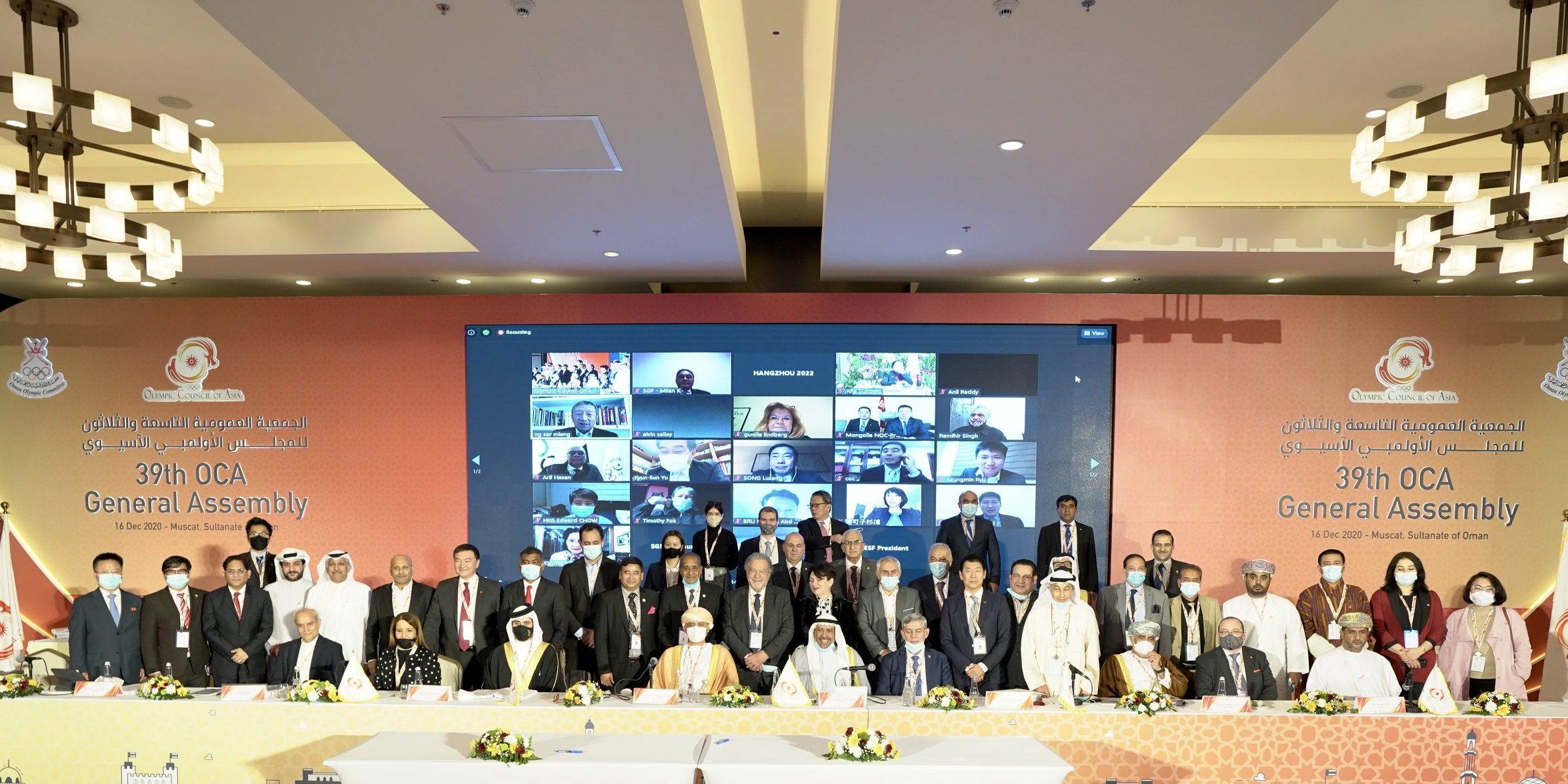 His Highness Sayyid Thi Yazan bin Haitham Al Said, Minister of Culture, Sports and Youth, inaugurated the meeting in the presence of Sheikh Ahmed Al-Fahad Al-Jaber Al-Sabah and their Highnesses, Excellencies and Heads of the Asian Olympic Committees.

His Highness Sayyid Thi Yazan bin Haitham Al Said thanked their Highnesses, Excellencies and Heads of the Asian Olympic Committees for choosing Muscat to host the work of the 39th General Assembly of the Olympic Council of Asia and cooperation and joint sports work between the various countries of the Asian continent.

His Highness added: Continental events and championships have formed a pivotal role in the development of sports in Asian, and they are also a tool to spread the culture of rapprochement and understanding between people of the continent and to establish the foundations of love and peace in the world, and we affirm our support for the principles of the Olympic Movement and its noble human values. This is an important meeting in Muscat and we wish everyone a pleasant stay and that the meetings will be crowned with success.

26 Asian National Olympic Committees that attended Muscat by manual method voted, and 19 Olympic committees online after their representatives preferred not to attend due to the outbreak of COVID-19. It hosted the 15th Asian Games in 2006, and witnessed the participation of about 10,000 male and female athletes from 45 Asian countries.

Yesterday evening, Sheikh Ahmed Al-Fahd Al-Sabah, after receiving a mandate from the members of the Executive Office of OCA, tried to reach a solution with the representatives of the two candidate cities and avoid voting between two “wonderful” cities, he said. It is the first time that voting has been held to choose a city to host these games since 2012 and the Asian Games is the largest tournament supervised by OCA, and it is the second largest multi-sport event in the world after the Summer Olympic Games, with more than ten participants. Thousands of male and female athletes from 45 Asian countries.

The President of the International Olympic Committee(IOC), Thomas Bach, thanked OCA for being a “reliable partner” of the Olympic Movement, during his message via video at the 39th General Assembly of OCA, which was held in Muscat. Bach considered that Asia “occupies the center stage in world sport” by hosting the next two rounds of the Olympic Games Tokyo 2020 next summer, the Winter Olympic Games in Beijing 2022 and 19th Asian Games in Hangzhou, China, in September 2022.

“The preparations for Beijing 2022 are going very well, and I would like to thank our Chinese partners and friends for all their efforts to make these Games successful and safe at the same time,” said the president of IOC. “I thank OCA and NOCs for being reliable partners and we look forward to these two exceptional Olympic years.” We enjoy a very strong partnership, and we collaborate to promote Olympic values ​​to ensure the safety of sport and put sport at the service of society. Bach indicated that the Olympic movement can build on these solid foundations and make a major contribution to the world’s recovery from the global Corona pandemic crisis. He added: We are happy to have reliable partners such as OCA because we are not only facing the many challenges of COVID-19, but also and even the most opportunities it provides.

Sayyid Khalid bin Hamad Al Busaidi, OOC Chairman, said: We thank OCA for granting us the honor to host this great and important Asian meeting, and he continued saying: It is a good fortune that this meeting coincides with the Sultanate’s celebrations of 50th National day of its modern renaissance. Over the past 50 years, a comprehensive renaissance in various fields of life, and thanks to its wise leadership, it assumed a prominent position among the countries of the world, characterized by credibility, neutrality, tolerance with all cultures, openness to all people, building friendships with them and partnerships in various fields with everyone. All this was an extension of Oman’s ancient history spanning more than 5 thousand years, and a reflection of what dictates to it, its important geographical position on the world map as a bridge between the civilizations of the East and West.

Al-Busaidi added: We are pleased that this meeting exemplifies what sports can contribute to strengthening bridges, friendship and partnership between people of the Asian, especially in the sports fields. He concluded his speech by saying: We look forward to this meeting achieving the desired goals, and for the OCA headed by Sheikh Ahmed Al-Fahad Al-Sabah to continue working to develop the sports system in Asian by organizing Asian tournaments and championships of all kinds. Despite the challenges imposed by COVID-19 pandemic, in a way that achieves the desired development for athletes in the Asian continent and enables them to ascend more podiums at the international level. We wish the honor host of the Asian Games 2030.