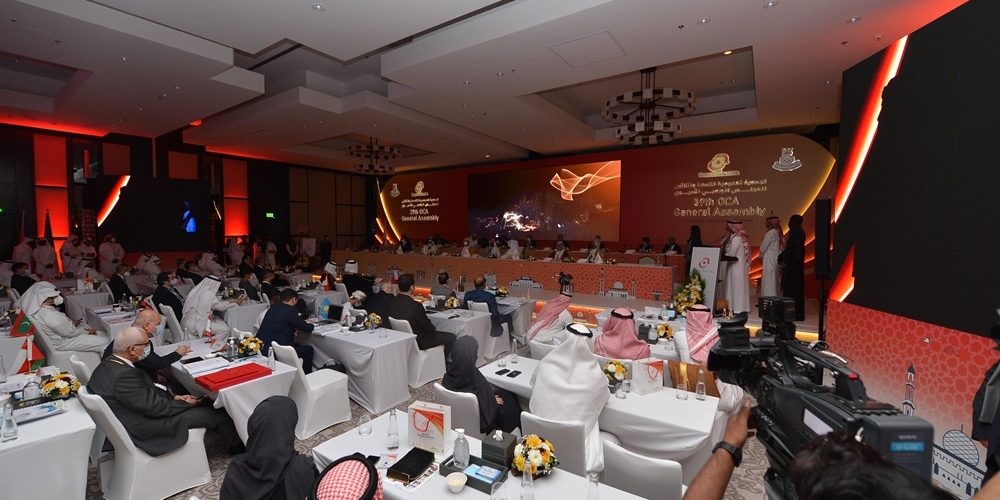 Hosting the 39th General Assembly of the Olympic Council of Asia

The Sultanate, represented by OOC, hosted for the first time the 39th General Assembly of the Olympic Council of Asia and the accompanying meetings and press conferences during the period (15-16) December 2020 at the JW Marriott Hotel in Muscat.

Consequently Doha won the hosting of the twenty one Asian Games for 2030, and the hosting of the twenty two Asian Games of the year of 2034 was assigned to Riyadh, and this was the results after the two capitals presented their files and the vote that was done at the end of the meeting of the General Assembly of the council and was sponsored by His Highness Sayyid Theyazin bin Haitham Bin Tariq Al- Said, Minister of culture sports and youth on 16 December 2020.

During the meeting there was also the honoring of the elites of Asian figures as always by Olympic Council of Asian and offered them merit award as a sign of appreciation for their effective participation and their obvious efforts in the sport field, and the presentation of visual presentations and reports by the organizing committees of the Asian games that will take place the upcoming years and the final preparations and the stages of the hosting including Asian Beach Games (Sanya- China), the 3ed Youth Asian Games ( Shantou- China), and the Indoors Asian Games and the 6th martial arts ( Thailand) and the 19th  Asian Games ( Hangzhou- China 2022).

This continental event witnessed great attention from the media; in addition to the presence of Oman Sport Channel, many channels covered this event including Saudi Sports and also the Qatar satellite channels at its head Bein Sports and Alkass channel, for these channels studios in the lobby of the official hotel were allocated for them “JW Marriott hotel” in the Muscat, in addition to the attention of many newspapers and radio channels also specialized social media platforms. The number of media specialists who attended the event exceeded 70 from inside and outside Oman.

At the local level, the event imposed at all levels taking into consideration that Oman is the host of these meetings and the goal is the success at all levels; therefore, the great institutional cooperation between OOC and the other governmental entities at its head the infinite support from the Ministry of Culture Sport and Youth and the participation of the Ministry of Media and Royal Oman Police and the Oman Diwan and the different and various media, and other entities.

The organizing committee of the meetings took great precautionary measures following the instructions issued by the high committee which is responsible to deal with the spread of corona virus (COVID- 19). The measures took into consideration the safety of all guests aiming at the success of this sport continental event and ensure to follow the instructions such as social distance, wearing masks, and putting the sanitizers in various places, in addition to reviewing the followed instructions concerning medical tests before coming to Oman.

OOC devoted a corner only for Oman identity at the lobby of the hotel JW Marriott to introduce the guests to the features of Oman’s identity and heritage; therefore, the corner included a gallery of photos that displays the most important touristic features in the Sultanate, and the distinguished Oman’s council and many craft industries as silverwares for example Khanjars and other things, also the industry of palmettes and the traditional fisheries.