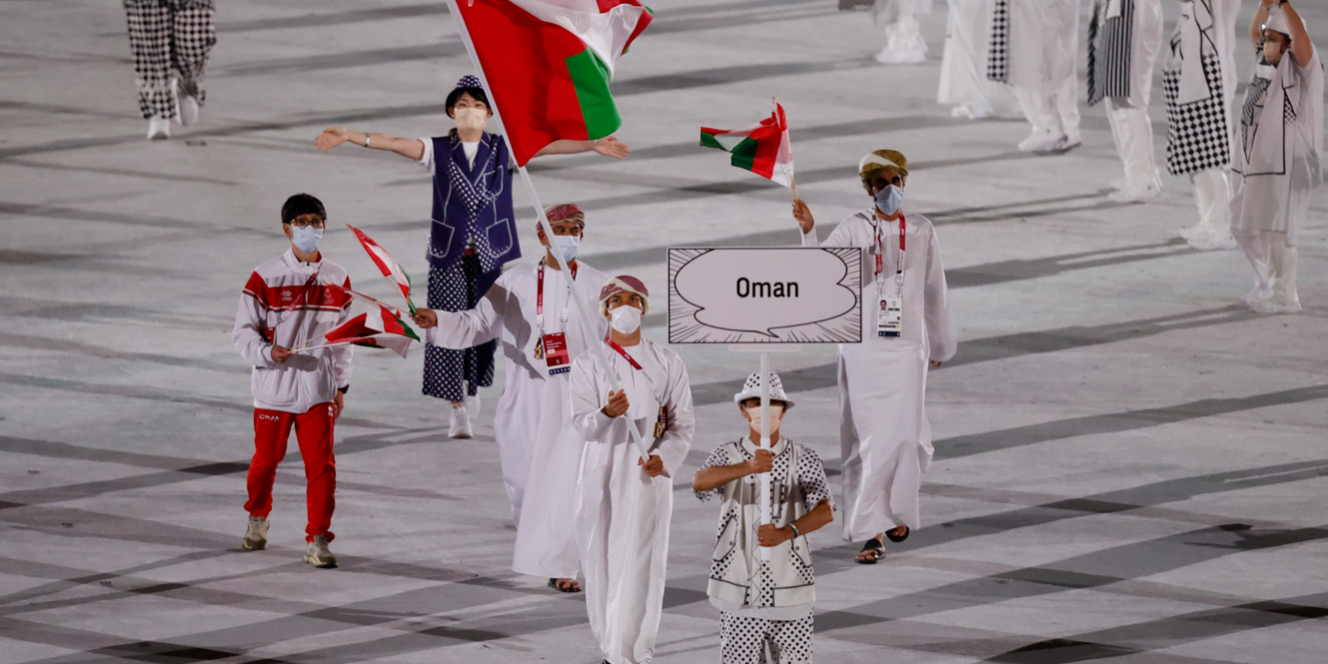 Oman’s promising swimmer Issa al Adawi expressed his happiness as he was the flag bearer of Oman during the march past at the opening ceremony of the Olympic Games Tokyo 2020 on Friday at the Olympic Stadium.

“It is a historic moment for any athlete to carry the flag of the nation. These moments will remain in my sporting memory for ever. I am proud of myself in this debut presence in Tokyo 2020 and will do the level best to deliver top technical performance,” he said.

Oman’s delegation participated in the opening ceremony of the Olympic Games Tokyo 2020 on Friday at the National Olympic Stadium in Tokyo. The Sultanate’s promising swimmer Issa al Adawi was the flag bearer.

Japanese Emperor Naruhito announced the declaration of the opening ceremony of Tokyo 2020 Olympics besides presence of top delegates including top dignitaries, officials from Japan government and International Olympic Committee (IOC) and representative from National Olympic Committees (NOC). The opening ceremony, which lasted for four hours, highlighted the Japanese history and culture. Japan’s tennis athlete Naomi Osaka lit the Olympic cauldron to mark the start of Tokyo 2020.

The national swimmer Issa al Adawi will compete in third heat during Men’s 100m freestyle competitions. He will be in the seventh line in the Olympic swimming pool at the Tokyo Aquatics Center. The 22 years old will kick off the Sultanate’s campaign in Tokyo 2020 as the first athlete on Tuesday.

The number of heats in the preliminary qualifiers is nine where 16 swimmers who will advance to semis in the following days. The finals will take place on Thursday where the medals will be delivered to the top three winners. The domestic swimming star will seek to confirm his top show in competing with other opponents from different parts of the world.

The national swimming head coach, Ayman al Kulaibi, arrived on Friday. He joined with the swimming team and began supervision of Issa’s training in the training pool at Tokyo International Aquatics Center. The local coach and Japanese coach Kenta will direct Issa during the daily training sessions until commencement of the competitions.

The national coach Ayman al Kulaibi said that attendance in the Olympic Games is a great opportunity for everyone. “As a coach I will try to gain the required experience from this globe sporting event. From this participation at Olympic Games, we are working to enhance the technical performance and shape the swimmer to compete in the regional and international levels,” he added.

Commenting on Issa’s performance during the last few years, the former Sultanate’s swimmer champion responded, “Issa has technical points which will assist him easily to reach the standard and international level. Moreover, reaching to the top technical level needs sustainability and continuity in the training and having the right exposure at regional and international championships. I hope we can use all these facilities which will help us to develop our swimmers’ performance.”

The ambassador indicated that the future is looking bright for Omani youths and sports, especially with the diversity of plans and strategies that have been developed in this framework and in line with the directions of Oman Vision 2040.

The Sultanate’s ambassador to Japan conveyed his greetings to all Sultanate’s delegation and athletes at the Olympic Games Tokyo 2020, adding that he and all members of the Embassy of the Sultanate of Oman in Tokyo are very proud to see representatives of Omani sports competing in the most important international sporting events, wishing them all a successful participation and hoping that they succeed in achieving advanced and honourable results for the Sultanate. Oman has many enthusiastic friends in Japan including the Japan-Oman Society, the Japan-Oman Club in Tokyo, the Japan-Oman Friendship Association in Hiroshima and the Japan-Oman Friendship Association in Nara who were all looking forward to cheering Team-Oman and were actually ready to receive them and support them during this great sporting event, but couldn’t due to Covid-19 restrictions and the countermeasures to prevent the spread of the virus. The ambassador concluded that we fully understand and respect the strict countermeasures in place adding that all our Japanese friends will continue to support Team-Oman even if they cannot attend in person.

The ambassador explained that Japan is a unique country in all fields, including sports, as Japanese are considered among the top most competitive people in various individual and team sports, adding that they are never defeated as they have the aspiration and determination to achieve their goals, noting that, the Japanese public always stands united by their teams whatever the outcome. The Japanese people will unconditionally continue to support and believe in their teams until they achieve victory in the end. The ambassador added, likewise all of Oman will continue to support our teams and the Omani athletes participating in this important sporting event.

The ambassador concluded his statement that next year will be an important year for Oman-Japan relations, as it will mark 50 years of modern diplomatic relations between both nations. He explained that the historical relations between the two countries actually extend to over 400 years, demonstrating the strength and commitment of our relations, and that we continue to seek to grow and expand it even further.