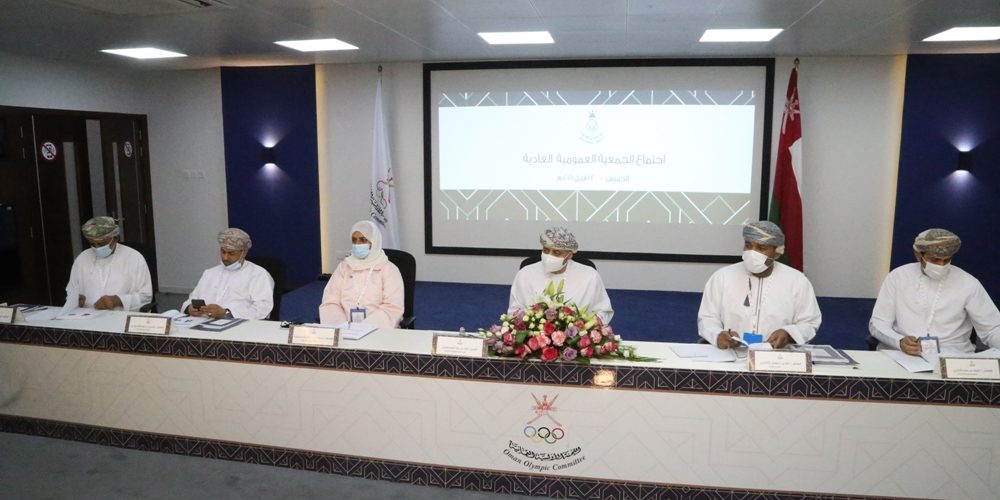 OOC Chairman started the meeting by welcoming the members, announcing that the quorum had been completed for the meeting, then began to review the agenda, as the previous minutes of General Assembly meeting held on December 24, 2020 were approved. The Chairman of the meeting reviewed the annual report on the administrative situation and activities as well as OOC programs that were implemented during last year, the internal activities project and the committee’s plan for international participations that were rescheduled after most sport activities were postponed due to COVID-19 that affected the whole world for 2021 and 2022, and given the lack of observations in this especially by the attendees, the item has been approved.

After that, the final account of the committee for the fiscal year ending 2020 was reviewed, where the auditor clarified some important points and details contained in the account, and accordingly it was approved by the members of the association.

OOC Chairman presented a summary of the statement submitted by the Board to the budget of the Finance Committee for 2021, and after reviewing its provisions, the GA approved the budget and the numbers contained therein.

Sayyid Khalid Al-Busaidi gave a visual presentation in which he addressed the most important actions he had undertaken since assuming the presidency of OOC in July 2019 and the executive steps that took place during his presidency, as well as features of the future vision of Oman sport, Olympic action priorities and the requirements of the coming period represented by the importance of establishing federations and committees. The sports evaluate the outcome of the sport activity for the current electoral phase and their views on achieving better Olympic results in various sports in the upcoming participation, as well as the optimal preparation for the period after stopping the sport activity and ensuring the sustainability of sports events and activities despite the circumstances that may occur in the future. Additionally, working with federations and sports committees to develop proposals concerning sports performance and submitting them to the main Committee for high performance, and activating the main directions of the committee in cooperation with sports federations and committees later.

After that, the meeting reviewed Ministerial Resolution No. 22 of 2021 regarding the controls for allocating and disbursing government support to OOC, and the Chairman was authorized to clarify some points regarding it with the Ministry of Culture, Sports and Youth.

At the end of the meeting, OOC Chairman thanked and appreciated the GA members for their response and participation in the meeting, the Board members, the General Assembly and the affiliates of the sports sector. He raised the highest verses of gratitude, coupled with the best congratulations and blessings to His Majesty Sultan Haitham bin Tariq on the occasion of the blessed month of Ramadan, asking God Almighty all blessings to Oman, Sultan, and people. He also affirmed the support of OOC and members for the file of the Sultanate hosting the Hockey World Cup to be held in January 2024, As the host country for the tournament will be announced during the Congress meeting to be held next May, wishing all success to Oman Hockey Federation for winning the organization of this global event. Oman Table Tennis Federation also congratulated for hosting the World Pioneer Table Tennis Championship in 2023, wishing Oman Table Tennis Federation all success in hosting the tournament.