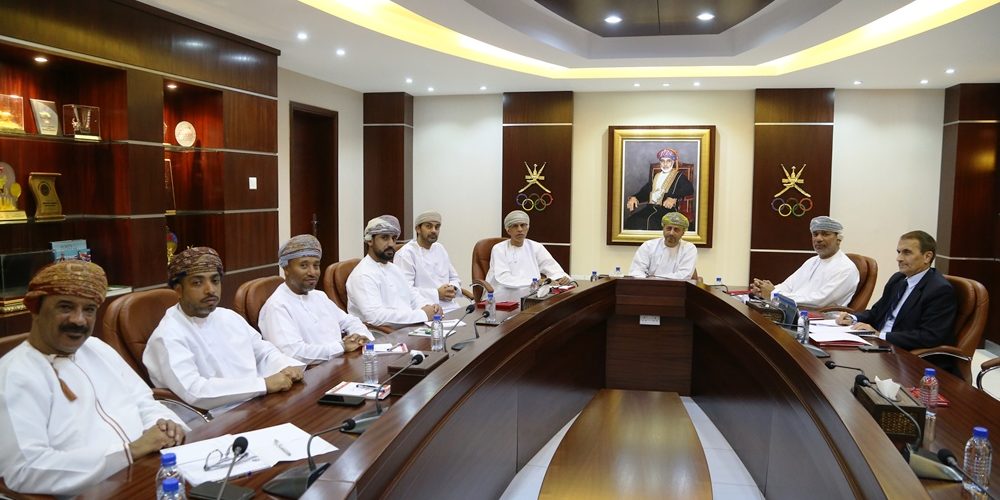 OOC continues to hold meetings with Sports Associations and Committees, where Sayyid Khalid bin Hamad Al Busaidi met on Tuesday with Oman Bicycle Committee chaired by Saif bin Sebaa Al-Rashidi in the presence of members and the coach, in addition to Taha bin Sulaiman Al-Kishry, OOC Secretary General, and other OOC technical.

During the meeting, the time frame for the inauguration of the Bicycle Committee was reviewed, as well as the plan developed by the committee since 2010 to spread awareness of the importance of playing the sport and its benefits for health starting from schools to establish a base of practitioners and the formation of national teams and infrastructure, in addition to the current plans and future projects that are working on the committee.

The meeting also discussed the local racing calendar organized by the committee, where 10 road races are held annually during the period (September – April) and 8 mountain races during the same period. The number of registered athletes in the Sultanate is 140 riders in various categories (Junior, Youth, and First Team) representing the national team in internationally.

The meeting also dealt with the youth training centers that were established to play the game, and there are 3 centers in Muscat and Nizwa, and a center is currently being established in Ibri, in addition to the challenges facing the committee in its workflow and how to take advantage of the potentials and resources available.

Also, OOC held yesterday evening a joint meeting with Oman Bowling Committee in the presence of Saeed bin Rashid Al Qatbi, Chairman of the Committee, its members and the coac, where the local activity of the Committee represented in the daily training of the national teams (Junior and Youth, and Female Teams) was discussed. The general league of the Sultanate (Ministry of Sports Affairs’ Cup), school competitions, Ramadan competition and open competitions, in addition to the Salalah Tourism Festival Championship. The number of registered game practitioners is 100 players, in addition to a number of national coaches and an international coach for the national team.

The meeting also dealt with the current objectives of the committee in paying attention to the age-groups, the directions and the visions that will be focused on in the next stage. In addition to the international championships in which the national teams achieved medals, as well as competitions that include the championships and the official calendar of the Gulf, Arab, Asian and International Championships, and the opportunities to achieve medals.